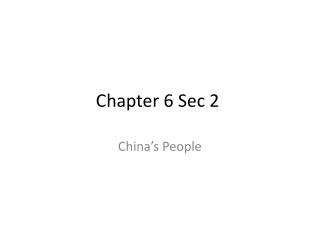 Chapter 6 Sec 2 . China’s People. People. China’s population is at about 1.54 billion people. About 92% of the population is Han Chinese. History . China’s civilization is more than 4,000 years old. Chapter 6 Sec. 2 - . what problems did employees of the railroad companies face? what was it like to live as a

Chapter 8 sec.6 - . how do i multiply a polynomial by a monomial. use the distributive property and exponent rules steps:

Chapter 7 sec.2 - . how do i solve a system of equations by substitution?. two equations together are called a system of

Chapter 3 Sec 2 - . voyage of the mayflower king henry of england officially broke off from the catholic church and

Chapter 13 Sec. 2 - . solutions and their colligative properties. solutions have them but pure substances do not have

Chapter 38 (Sec. 2 ) - . comma splices and fused sentences. what is a comma s plice ?. a comma splice is two main clauses

Chapter 11 Sec 2 - . radical revolution and reaction. what were the differences between the girondins and the