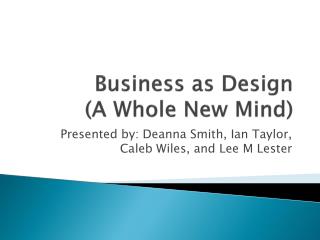 Business as Design (A Whole New Mind). Presented by: Deanna Smith, Ian Taylor, Caleb Wiles, and Lee M Lester. The book. A Whole New Mind. Movement of the Ages. The Brain. Brain has 100 billion cells and one quadrillion connections A WHOLE A MIND - . why right-brainers will rule the future by: daniel h. pink. ask yourself…. can someone overseas do

Daniel H. Pink A Whole New Mind - . riverhead books new york 2005. a summary presented via a collection of quotes and

Why you should learn AngularJS and what are its benefits? - Whenever one thinks of learning a new computer language or an

How to Work As A Doctor In Australia - Are you a doctor who is planning to move to australia? medical jobs in australia