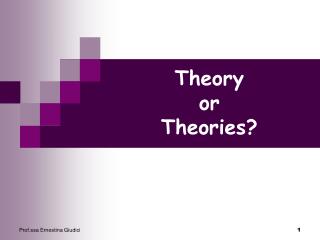 Theory or Theories?. To begin …. Is it possible identify a Theory of communication field? There is no canon of general theory to which they all refer ONE specific Theory doesn’t exists yet . To begin …. Scholars of communication apparently neither agree nor disagree about much of anything Valence bond theory (VBT) - . there are theories as to why the links in the complexes and transition elements, :

Theories of Chemical Bonding - . theories of bonding: explanations for chemical bond, lewis dot structures and the