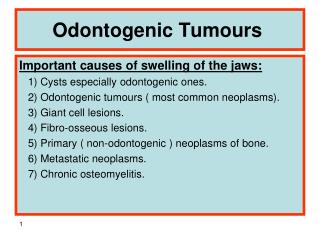 DISORDERS OF MAXILLA AND MANDIBLE(CYSTS AND TUMOURS) - Dnt 243. dr.shahzadi tayyaba hashmi. disorders of maxilla and

Skin Tumors - . introduction. the great majority of cutaneous tumors are of little consequence and may never attract the

Tumor Markers - . overview. cancer remains the second leading cause of death in the usa, behind heart disease, with an

Oral Epithelial Tumours - . it’s very important to know if the origion of the lesion is epithelial tissue or connective

Tumours of the CNS - . tumours of the cns. histological distinction between benign and malignant lesions may be more