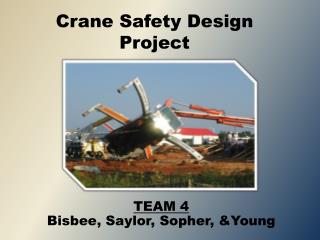 Crane Safety Design Project. TEAM 4 Bisbee, Saylor, Sopher , &Young. Purpose : To design a device to aid in the prediction and prevention of crane tipping for a private customer. It was determined through independent research and customer correspondence that:. Design Project Safety - . ltms 525 jen selby. activity/purpose. who are my learners?. the students will be able to:

Legal Aspects of Crane Safety - The players. this section covers the rights, responsibilities, and liabilities of the