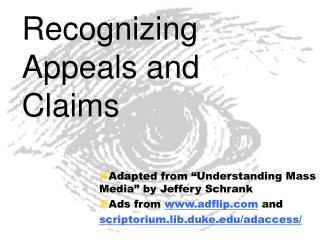 Recognizing Appeals and Claims. Adapted from “Understanding Mass Media” by Jeffery Schrank Ads from www.adflip.com and scriptorium.lib.duke.edu/adaccess/. Advertisers use claims and appeals to convince us to purchase their products. Let’s take a closer look at each and view some samples ads. ERISA Claims and Appeals Procedures - In simple terms. erisa is meant to make sure you get the benefits you deserve and

Module 13: Claims &amp; Appeals - . module objectives. after this module, you should be able to: identify claim

Module 13: Claims &amp; Appeals - . module objectives. after this module, you should be able to: identify claim

Complaints and Appeals - . quiz. 1. what is a complaint?. a. an expression of dissatisfaction. b. a request for a review

SENTENCING AND APPEALS - . “will the punishment of the thief bring back the stolen money? no more than the hanging of a

Admissions and Appeals - . 16 th october 2014. agenda. exercise purpose of catholic schools obligations of the church and