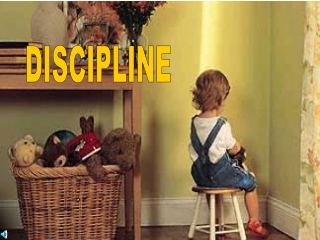 DISCIPLINE. The role of the parent. To produce a child is simply a matter of biology. To “parent” a child is a difficult role to fulfill. Psychologist Abraham Maslow developed a Pyramid of Human Needs, an hierarchy of needs critical to survival. Discipline - . discipline for toddlers is very difficult they love looking and testing for boundaries you must set

Discipline - . discipline for toddlers is very difficult they love looking and testing for boundaries you must set

Discipline - . by alauna rupert. hallway rules. no running stay on the right side of the hallway no running up the

Discipline - Imposed from the outside eventually defeats when it is not matched by a desire from within.

Church Discipline - . ii thessalonians 3:6, 13-15. church discipline. most of us have the same reaction when we hear the

Employee Discipline - . objectives at the completion of this module, participants will be able to: identify those