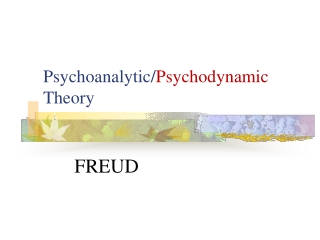 personality: theory and measurement - Personality. the distinct patterns of behavior, thoughts, and feelings that

Psychoanalytic Theory - . why study psychology in english class? hint: it’s not because in her subconscious, your

Freud and Psychoanalysis - . personality theory psyc 4200. why use psychoanalytic and psychodynamic models?. advantages

Psych - Unit 8 - Freud &amp; Psychodynamic Theory - . what do you need to know? list and describe the 3 components