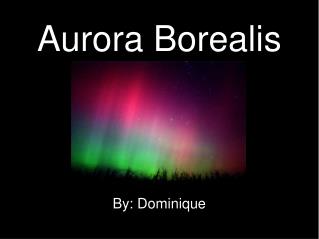 Aurora Borealis. By: Dominique. What are the northern lights?. A phenomenon occurring near the polar regions that appears as wisps and luminous arches of light. Where can you see them?. Colors in the Sky - With a severe solar storm raging, the northern lights, or aurora borealis, could be seen from the

Auroras - . what is an aurora?. natural light display electrically charged particles colliding with atoms in the upper

http://www.healthcarebooster.com/borealis-cream/ - So, to eradicate stubborn indications of getting older, it's possible