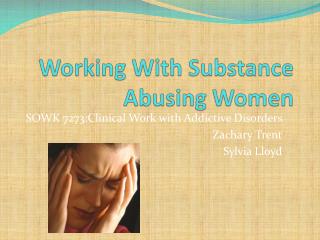 Working with the non-abusing parent - . factors contributing to vulnerability “ what factors make it more likely that a

Working with people recovering from Substance Misuse - . a workshop presentation by laura walker of bury drug and alcohol

Substance abuse in women - Some cases, the factors that lead women into drug abuse differentiate than those of

Abusing One Another With Our Tongue - . why is this important? because of the strong warnings concerning the

Chapter 24: Substance Abuse - . substance abuse has no place in athletics there is an increasing number of athletes