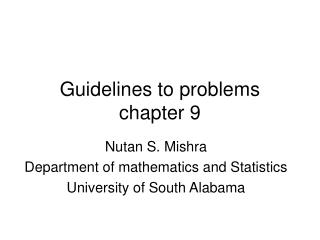 Guidelines to problems chapter 9. Nutan S. Mishra Department of mathematics and Statistics University of South Alabama. Important points to remember. X is a random variable with parameters µ and σ . Chapter 1 Business Information Systems: An Overview - . what is a problem?. problems in business are undesirable

Chapter 11 Psychological Disorders and Their Treatment - . prevalence of psychological disorders. in a year in the u.s.: