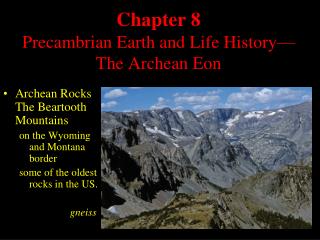 Chapter 8 Precambrian Earth and Life History—The Archean Eon. Archean Rocks The Beartooth Mountains on the Wyoming and Montana border some of the oldest rocks in the US. gneiss. Precambrian Time Span. The Precambrian lasted for more than 4 billion years! Life in the Precambrian - . prelude to us. major steps in the precambrian evolution of life. origin of life (4.0 - 3.8

Chapter 19: History of Life on Earth - . section 1: how did life begin?. the condition of early earth were hypothesized