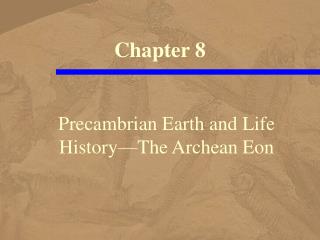 Chapter 8. Precambrian Earth and Life History—The Archean Eon. Archean Rocks. The Twin Lakes in Beartooth Plateau, MT and WY is called one of the most scenic in the U.S. Most of the rocks are Archean-aged gneiss. . Precambrian. The Precambrian lasted for more than 4 billion years!

Tectonic Model for the Proterozoic Growth of North America - . presentation based on whitmeyer and karlstorm (geosphere,

大陸地殼演化 Genesis and evolution of the continental crust - . i. introduction - principal topics to be covered:

The Archean and Proterozoic - . part 2. a quick review. the big bang red shift accretion of solar system earth moon. a

Formation of Earth’s Atmosphere - . 5 pieces of paper – f or each vocabulary word: include description/definition and

Honest Work by Ciulla et al. Chapter 8 - In this powerpoint we discuss the dependence effect and the ethics of

Justice, Crime, and Ethics (Braswell): Chapter 8 - What is the ethical duty of a lawyer? this powerpoint considers two

Lecture 13 Chapter 8 - . genes and traits of interest ii neal stewart. discussion questions. 1. other than the products