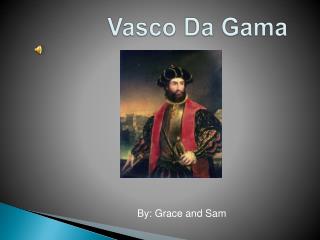 Vasco Da Gama. By: Grace and Sam. Introduction. Born in 1469, in Sines, Portugal Father was Estevao da Gama, a Portugese noble and courtier Became a naval officer in 1492 Died on December 35, 1524, in India Da Gama was married to Catarina de Ataide