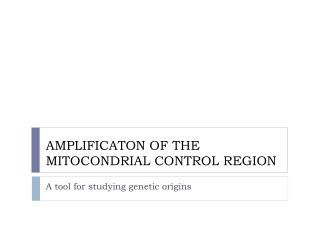 AMPLIFICATON OF THE MITOCONDRIAL CONTROL REGION. A tool for studying genetic origins. Human DNA. What makes up human DNA? DNA is bound to proteins in 46 chromosomes found in the nucleus of almost every cell in your body. The Region of: - . locations. costs and features. people and places. the movie!. summary.

The region of aragon : - . the problems of the unbalanced urban. spanish group. march 16th 2012. ii.- presentation of

Prevention and control of noncommunicable diseases in the European Region of WHO - . zsuzsanna jakab regional director

Flow Control Impact on Members, Residents and Businesses of the Region - Isle of wight board of supervisors meeting