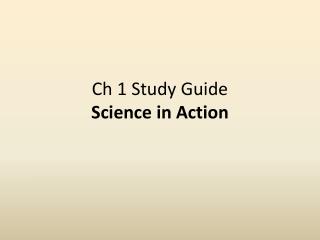 G uide and Tour Leader - . tourist guide should be able to liven the past to make the present more satisfying and future

Ch. 1: Science in our World! - . science!. question everything!. science and scientists. science- the knowledge obtained

A How T o G uide - . using slf’s tuberculosis symptom screening tool for adults. what is the purpose of the tb symptom

AREA OF STUDY 1 Cells in action - . pete hamilton sandringham college. biology:. is a natural science concerned with the

A G uide to Tools &amp; Resources - . eif.org.uk. @theeifoundation. tools and resources to help you…. making the

Ch.1. sec 1 What is science? - . key terms: what skills do scientists use to learn about the