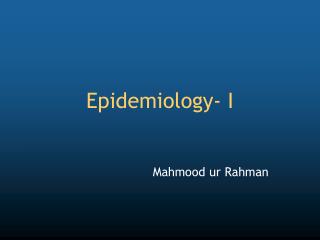 Epidemiology- I. Mahmood ur Rahman. Definition of Epidemiology. Epidemiology is the study of the distribution and determinants of diseases or states in population groups and the application of this study to the control of health problems

The Epidemiology of Diversity in Epidemiology - . history of the minority affairs committee and possible future