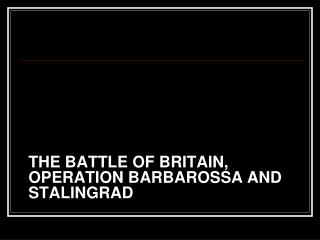 The battle of britain , operation barbarossa and stalingrad The battle of britain , operation barbarossa and stalingrad

The Battle of Stalingrad - . stalingrad. what can we infer about stalingrad, based off the name alone?? why was

Ortona - The battle of. ortona. december 20 th - december 28 th 1943. combatants. the battle was between canada and

Battle of Britain - . churchill stands up. after the fall of france, hitler expected britain to negotiate peace with

The Eastern Front and the Mediterranean - . timeline. use page 776 to add the following events to your timeline if they

Germany Surrenders - . by: luca franceschetti and rudy szwarc. the end of hitler. battle of stalingrad 1942-43. was a

BELLWORK - . what was the outcome of the battle of britain? list three similarities between hitler’s war in europe vs.

WW2 The Battle Of Britain - . the r.a.f the luftwaffe. the raf had more fuel to fly the planes. what saved us was the

Hitler Turns on Russia - . why did hitler turn on russia?. russia would serve the german “master race” as a supplier

Operation Barbarossa - We have only to kick in the door and the whole rotten structure will come tumbling down. operation