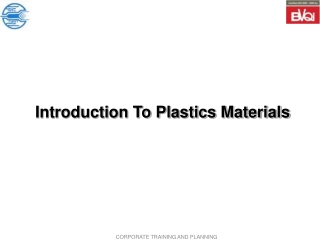 Introduction To Plastics Materials. Classification o f Polymers. POLYMER. “ The polymer (poly- many; mer-unit or parts) is a high molecular weight compound, formed by the combination of small molecules of low molecular weight ”. OR. CHAPTER 8 PLASTICS RECYCLING AND BIODEGRADABLE PLASTICS - . this chapter begins with an overview of municipal solid waste

Use of Molten Plastics in developing alternative building materials - . paper presented at the 20 th institution of

ME 350 – Lecture 11 – Ch 8 - . polymers are described as plastics and rubbers three categories: which are plastics?

Plastics - . plastics. page 145. plastics- the beginning. cheap and durable alternative to glass and animal products such

Polymerisation - . plastics. plastics are substances made from alkenes. common plastics are: polythene or poly(ethene).

Plastics - . we use this matter resource in so many ways—but most people know very little about them. what are most

Pollution and the Marine Environment - . pollution. the introduction by humans of substances, materials, or heat energy