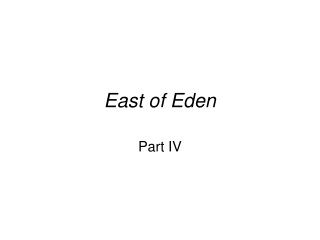 Eden - . by: kaleb , eriq,and nate. the name. the name of our city is eden. we chose this name because it means a

EDEN - Emerging diseases in a changing european environment jean-françois guégan on behalf of the steering committee.

The Garden of Eden - . this story comes from the book of genesis in the bible. it is a story about the loss of innocence

Beautiful Valley Of Eden - . beautiful valley of eden! sweet is thy noontide calm, over the hearts of the weary,

The tragedy of eden - . part 2. memory verse : matthew 19:8 . he saith unto them, moses because of the hardness of your

The Apple of Eden - . the apple of eden. did you notice the assumption? the bible does not say “apple” but the