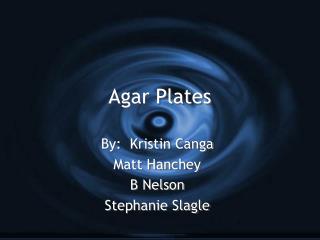 Agar Plates. By: Kristin Canga Matt Hanchey B Nelson Stephanie Slagle. Why Use Agar Plates?. To obtain single isolated colonies of microorganisms. The isolated colonies will allow you to observe specific characteristics such as colony size, shape and color. Types of Media. Preparing Agar Plates - . as demonstrated by andrew corcoran. use an appropriate flask. use a flask that is twice the

Bacteria Growth on the Agar Plates - . sterile. free from live bacteria or other micro-organisms: a sterile operating

AGAR - . what is agar?. agar is a gelatinous substance derived from seaweed. in the past century agar has been used as a

EMB agar - . only gram-negative bacteria grow on emb agar. (gram-positive bacteria are inhibited by the dyes eosin and

4.11 To investigate the growth of leaf yeast using agar plates and controls - . before you start get or make a copy of

Thayer - Martin agar - . chocolate agar has been modified to be selective for neisseria gonorrhoeae and neisseria