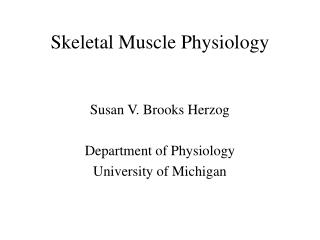 Skeletal Muscle Physiology. Susan V. Brooks Herzog Department of Physiology University of Michigan. Structural hierarchy of skeletal muscle. Muscle. A little less than half of the body’s mass is composed of skeletal muscle, with most muscles linked to bones by tendons through which The Muscular System - . the muscular system. muscles are responsible for all types of body movement three basic muscle

Nerve and Muscle - . physiology of nerve. the neuron. the basic structural unit of the nervous system. structure: the

Muscles and Muscle Tissue - . p a r t a. muscle overview. the three types of muscle tissue are skeletal, cardiac, and