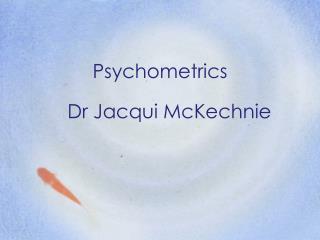 Psychometrics - . psyc 325 paul jose thought for the day: “studies at jikei university in tokyo found that people who

Hip Psychometrics - . peter baldwin joseph bernstein howard wainer. models vary in strength. when you have a lot of data,

Measurement and Psychometrics - . pm 515 jenifer unger ping sun. why is measurement important?. how do we assign a value

Psychometrics: An introduction - . overview. a brief history of psychometrics the main types of tests the 10 most common

Using Psychometrics :: Your Facet5 Journey - . consulting tools and metaskill. is a specialist provider and developer of

Interpretation: How to Use Psychometrics - . a different format. previous talks were generally about one topic today’s