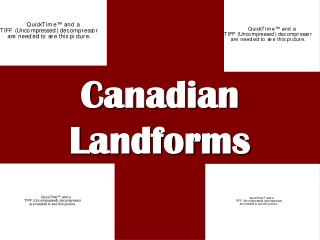 Canadian Landforms. Types of Landforms. Canada is made up of three distinct types of landforms: The Canadian Shield Lowlands Highlands. The Highlands. Canada’s three highland areas lie to the east, north, and west of the Shield and lowlands areas The three mountainous areas are: Landforms - . mr. perez. what is a landform?. a landform is a natural feature of the landscape or natural physical

Landforms - . by: andrew 8.2. canyon. an example of a canyon: the grand canyon, arizona, usa. a canyon is a giant crack

Landforms! - . third grade. volcano. opening in the earth through which lava, rock, ashes, and gases are forced out. .

Landforms - . tributary. a river or stream flowing into a larger river or lake. oasis. an area in a desert where there is

Landforms - . mitchell 2b. h ills. land that is higher than land around it but not as high as a mountain. mountains. the

LANDFORMS - . landform dictionary activity. as you view this powerpoint you are to complete your landforms dictionary.

Landforms - . what are landforms?. are natural physical features of the earth’s surface. 2 types of forces act on

Landforms - . by cade, and cooper, and tristen. plains. a large area of flat land is called a plain. example: the great

Landforms - . today we will create a landforms picture glossary. when you use pictures from the internet for a school