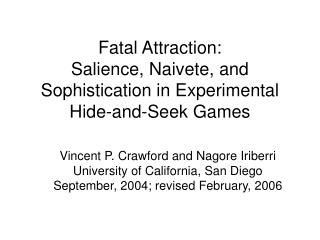 Hide and Go Seek: Internet Style. - Hide. you think you've limited your profile information. just your first name and a

Hide and Seek – a beginner’s guide - . a soldier and a boxer before he was a poet wrote many poems about childhood

Hello ! Is anybody on this meadow for a game? - . playing hide and seek is for babies! let's play a gendarme and a

Handwashing - . paula barlow, rn kingsland elementary. wash your hands often!. the most important thing you can do to