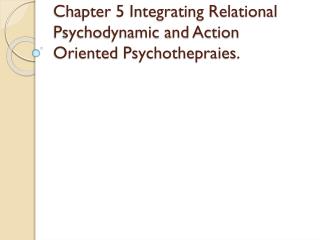 Chapter 5: Relational Database - . logical design. learning objectives. you should be able to … transform any erd into

Action Oriented - . things do not happen. things are made to happen.  -john f. kennedy. the bumble bee. -what “can’t

Being Participatory and Action-Oriented - . conducting community needs assessments and service evaluations in your