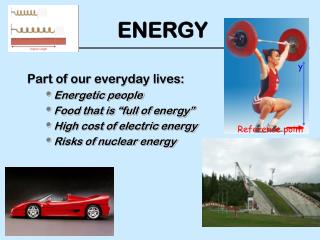 y. Reference point. ENERGY. Part of our everyday lives: Energetic people Food that is “full of energy” High cost of electric energy Risks of nuclear energy. ENERGY. Energy: The ability to do work Energy can neither be created nor consumed or destroyed

Energy - . energy. energy can be described as the ability to do work energy that is stored in organic molecules is known

Energy - . work. introduction a force is a result of an interaction between objects that can change the state of motion

Energy and Alternative Energy - . natural resources. renewable resources can be replenished over fairly short spans of

Energy and energy resources - . section 1 what is energy?. energy is the ability to do work. work is when a force causes

KS4 Energy - Energy Resources - . 1. the vast majority of the energy resources on earth can trace their energy back to

Energy - . “you are meddling with forces you cannot possibly comprehend.” - marcus, indiana jones and the last

Energy and Energy Transformations - . learning goals/objectives. the students will define energy and describe and give an