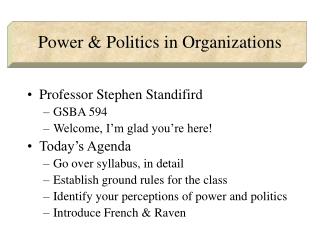 POWER AND POLITICS - . power vs leadership. leadership – an attempt to influence another individual or groups ( hence

Organization Theory - . building a model of empowerment practice. the role of theories. theories describe the

The Politics of Abortion: The Work of the Politician - . a symposium to mark the 20th anniversary of r v. morgentaler dr.