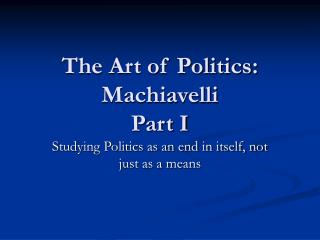 Government and Politics AP Review - . important supreme court cases for the most part, information in this powerpoint is

John F. Kennedy and the Politics of Expectation - . with his new frontier program, kennedy promised to “get america

Government and Party Politics Section 1 - . “how did debate over the role of government lead to the formation of

Money in politics - . “money is the mother’s milk of politics” jesse unruh, speaker of the california assembly from