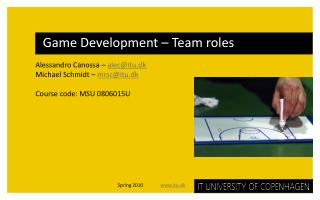 The Game of Science and the Science of a Game The Development of an HIV Prevention Video Game - . lynn e. fiellin, m.d.

Stock Market Game - . by: amber, jess, marion, and ashley. the stock market game is a game that gives students the chance

Welcome to THE BLAME GAME! - . rules of the game!. we will have two teams all answers to the questions will be given

Game Development - . goals of the class. game development as an interdisciplinary art understanding roles in development

Mobile Game Development Company - Looking for the best mobile game development company? fugenx technologies is one of the

The Game Development Companies in India -What Qualities would you Look For? - A gaming company like red apple