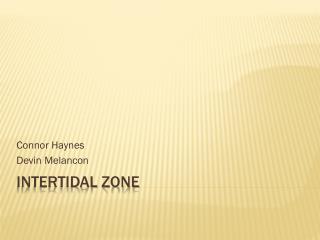 Connor Haynes Devin Melancon. Intertidal Zone. The Intertidal Zone, sometimes refered to as the Littoral Zone. It is in the biome of marine aquatic environments in which is found along coast lines all across the world

Copywriting, Conversion and Your Customer's Comfort Zone - You can examine your sales funnel and buying cycle matrix all