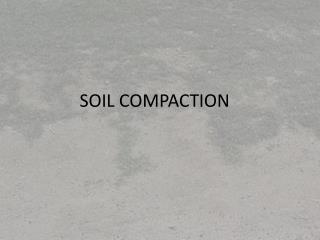 SOIL COMPACTION. What is Soil Compaction. What is soil compaction? Compaction occurs when a force compresses the soil and pushes air and water out of it so that it becomes more dense. Compaction is more severe when the soil is wet and less able to withstand compression. Soil Compaction - . cosc 323: soils in construction. question. the contractor, during construction of the soil

8. SOIL COMPACTION - . introduction. in geotechnical engineering practice, the soils at a given site are often less

COMPACTION OF SOIL - . definition: it is the process of bringing the soil particles close together to a dense state by

Compaction - . i.   *definitions the process of forcing air out of the soil, resulting an increase in density. the

Map of Soil Susceptibility to Compaction in Europe - The institute for environment and sustainability. map of soil

Compaction - . in-situ soils used as: bases for the construction of highway pavements embankments or leveling material

Compaction - . purposes of compaction. compaction is the application of energy to soil to reduce the void ratio this is