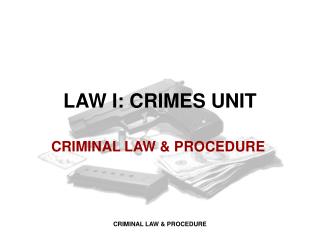 LAW I: CRIMES UNIT. CRIMINAL LAW & PROCEDURE. FELONIES. FELONY: A major crime for which the penalty may be imprisonment for a year or longer and possibly even death. A person convicted of a felony may be barred from certain types of work, such as the practice of law or police work.