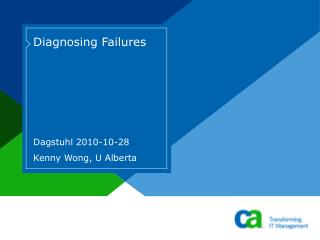 Diagnosing Failures. Dagstuhl 2010-10-28. Kenny Wong, U Alberta. Motivation. Need timely problem determination when failures happen diagnose the root cause of a failure in an enterprise system how to determine likely causes? Diagnosing Organizations - . diagnosis defined. diagnosis is a collaborative process between organizational members and

Diagnosing Dying - My proposition. there is often an unspoken understanding that a person is dying, but this tacit