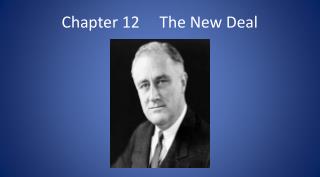 Chapter 12 The New Deal. What were the key events of the presidential election of 1932?. Americans blamed Hoover and the Republicans for economic problems Roosevelt promised relief and public works programs to provide jobs CH. 12 - THE NEW DEAL - . this was the name fdr gave to his new program to fight the depression it was a revolution in

CHAPTER 15: THE NEW DEAL - . journal. what great depression photograph impacted you the most? why?. cesar chavez groups.

Chapter 16 The New Deal - . section 1 restoring hope. roosevelt confronts the emergency. {with the help of his advisory

Chapter 22 The NEW DEAL - . why was the 1932 election an opportunity for democrats to unseat president hoover?. many

Chapter 26 “New Deal” - . &quot;i pledge you, i pledge myself, to a new deal for the american people.&quot;

The First New Deal Chapter 10.1 - . roosevelt is elected as president in 1932. he has no clear agenda just do something.

1932 Election &amp; the New Deal - . amidst the great depression, the presidential election of 1932 took place.