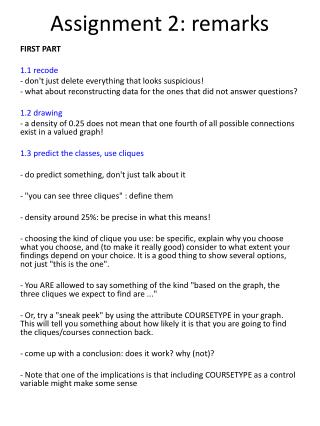 Assignment 2: remarks. FIRST PART 1.1 recode - don't just delete everything that looks suspicious ! - what about reconstructing data for the ones that did not answer questions ? 1.2 drawing General Remarks - An introduction to microlepidoptera: phylogeny, classification, diversity, and morphology (gag me with

Assignment Writing - . what is an assignment?. focus on essays and reports. written assignments. you are provided with.

Concluding Remarks - . workshop goals. 1) take stock of the situation of the different machines, schemes, studies and