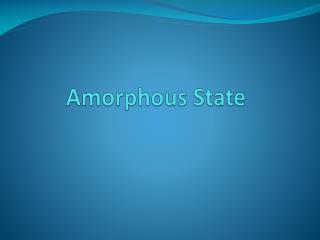 Amorphous State. An amorphous polymer does not exhibit a crystalline X-ray diffraction pattern, and it does not have a first-order melting transition. Solid or Liquid?. Is there any Chain Order in Amorphous State?. Short Range Interactions In axial direction of a chain Kuhn segment length Amorphous semiconductors - . kugler s á ndor. books. (some of them). and few

The Solid State Crystalline and Amorphous Solids Ionic Crystals - . “the universe consists only of atoms and the void:

Amorphous Graphite Market - The amorphous graphite market is expected to grow from usd x.x million in 2020 to usd x.x

Crystalline Versus Amorphous Solids - . liquids, upon cooling, tend to crystallize. this means that atoms weakly bound in

Amorphous PET (APET) has: - A brief synopsis of pet (polyethylene terephthalate) derived from ethylene glycol and

The Challenge of Amorphous Computing - . to develop engineering principles and programming techniques for directing the