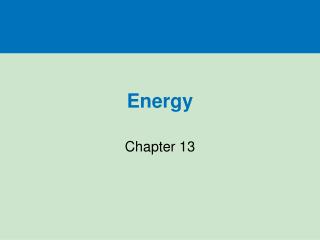 Work, Energy, and Power - . lesson 1: basic terminology and concepts definition and mathematics of work calculating the

Ch6.1 The Nature of Energy Energy – the capacity to do work or to produce heat. Law of Conservation of Energy – - An

Home Energy Solutions - . easy ways to help yourself. topics. why save energy? how is energy consumed in your home? how

Work and Energy - . chin-sung lin. energy. a central concept underlying all sciences however, concept of energy is very

Chapter 6 Metabolism: Energy and Enzymes - . cells and the flow of energy. energy is the ability to do work. living

Energy - . what is it? energy is conserved how do we use it in physics. an energy pathway. we need energy where does it