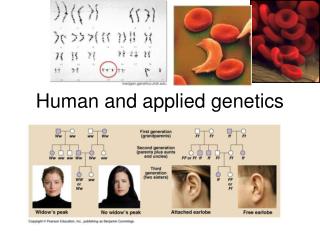 Human and applied genetics. Section 1 Vocabulary:. 1. Carrier: an individual that is heterozygous for a recessive disorder 2. Pedigree: a diagram that traces the inheritance of a particular trait through several generations using symbols to illustrate the inheritance of the trait. APPLIED GENETICS - . applied genetics using our understanding of genes to create changes in the dna of organisms there

Applied Genetics - . aim: 1. how do mutations occur? 2. how do we get genetic disorders and how can we detect them? 3.

Topic : Applied Genetics - Aim : describe some methods that can be used to develop organisms with desirable traits.

2.5 applied genetics - . learning outcomes: 2.5.2 understand that mutations are random changes in the: − number of