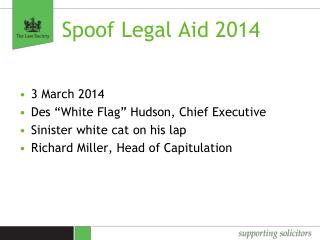 Spoof Legal Aid 2014. 3 March 2014 Des “White Flag” Hudson, Chief Executive Sinister white cat on his lap Richard Miller, Head of Capitulation. Introduction. What we will cover. Overview Headlines of the decision How the Society will prevaricate next Details of the capitulation LEGAL MEDICINE - . -branch of medicine that deals with the application of medical knowledge to the purposes of law and in

CHAPTER - . 5. policing: legal aspects. the u.s. constitution is designed to protect citizens against abuses of police