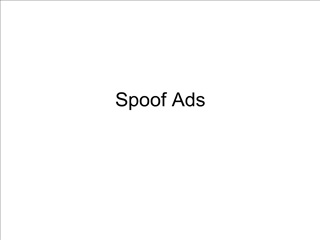 Food. . Fashion. . Miscellaneous. . Tobacco. . Alcohol. . Nearly 50% of automobile fatalities are linked to alcohol. 10% of North Americans are alcoholics. A teenager sees 100,000 alcohol ads before reaching the legal drinking age. . "Drink provokes the desire but takes away the performance" --William Shakespeare .

Exploring Spoof Ads from Adbusters Magazine - . food. why are you buying your food from a tobacco company?. what do you

Spoof - . does . what?. a text which tells factual story, happened in the past time with unpredictable and funny ending.

The Spoof - . a presentation by tom and erin. “spoof”. films that make fun of other films/genres there is no such

Send Spoof SMS Free - You can enter your phone number or a name. select a type of anonymous text. enter the phone number

Best of Ads, Worst of Ads - . abby fritch tiffanie heestand. the ads of 2007. last year a long list of companies,

Bing ads along with Google ads - Searches on google are around 1.2 trillion and on bing is 5.4 billion. clearly, bing

job ads - Get an overview of all available job ads in denmark here and find the right job ad for you!

Google Ads - Can work for almost any advertising budget. set a monthly budget cap, and never go over it. plus, you can

ADS Wizard - . logon on the server as administrator click start, run and type in dcpromo then enter the ads wizard

Political Ads - . what makes an effective ad?. political ads can communicate, persuade, and even

classified ads - Is a free advertising website , sell your used car, property for sale,property for rent, list your

89. The Billboard Vigilantes First ForayNow it's billboards that are being liberated. Six billboards scattered throughout San Francisco were "liberated" yesterday by a group calling itself the "Billboard Liberation Front."

90. Billboards can be liberated, apparently by changing their messages. Those liberated yesterday contain advertisements for Fact cigarettes. The liberators changed "I'm realistic, I smoke Fact..." to "I'm real sick, I smoke..."

91. A spokesman for the Billboard Liberation Front said the alterations were made by gluing new letters over the old with rubber cement because "we're not into vandalism."

92. The spokesman, who was interviewed by telephone and who refused to give his name, said the Billboard Liberation Front opposes false advertising.

93. He said yesterday's outing was the group's first endeavor and there are "350 members" of the BLF. - Examiner staff

94. BLF COMMUNIQUE MAY 8, 1989 One of the primary goals of the BLF has always been to encourage and accelerate the ongoing paving of the world. For, as we all know, where there are roads, there are billboards. Exxon and other fine corporations contribute to this necessary evolutionary process through many methods, including the use of petrochemicals in the production of asphalt. Man, being a natural creature can create or produce nothing that is not "of nature", or unnatural. This is why we believe that Exxon should in no way be castigated for dumping millions of gallons of oil into some silly bay in Podunk, Alaska. The seepage of oil is a natural occurrence (as recently noted by an Exxon official), and, as such, the Alaskan spill should be applauded by all Americans as another step in our ongoing evolutionary destiny. We should capitalize on our good fortune as presented by Exxon Corporation. "PAVE ALASKA." In conjunction with the ongoing natural "greenhouse effect", we should use this occurrence as a beginning which will open up new opportunities for real estate development in colder climates. We at the BLF say "Pave Alaska." Jack NapierBLF Spokesperson

97. The Billboard Liberation Front, in a show of solidarity with our beleaguered and unjustly maligned corporate comrades at Exxon Corporation have decided to dust off our coveralls and re-enter the vital field of outdoor advertising improvement. Our first new actions took place early Monday morning, May 8th at six locations in California. The two San Francisco locations are: Bay Bridge On Ramp - Intersection of 1st Street and Harrison. This board is visible to southbound 1st Street traffic and westbound Harrison St. traffic. Northwest corner of the intersection of Kearney & Pine streets. in the Financial District, visible to Kearney & Pine St. traffic.

99. PRESS RELEASE 12/31/89San Francisco, California For immediate release. In the early morning hours of December the 31st the Billboard Liberation Front struck again. The "Harrahs Club" billboard near the intersection of 5th & Bryant Streets was entirely altered from its former message: HARRAHS RENO variousperformers TAHOE variousperformers has been changed to AMERICA EVERYWHERE: DON'T WORRYBE HAPPY THE WHITE HOUSE: AIDSCRACKTHEHOMELESS  This billboard is visible to Eastbound Bay Bridge traffic. The BLF used exclusively non-destructive and temporary methods for this billboard retrofit. Anyone wishing to contact the BLF should leave a message in the "San Francisco Bay Guardian" personals (spiritually category). Photos of our previous actions are available upon request. Please see enclosed photo and communique. BLF spokespersonJack Napier

111. Every Cuban is Not Castro

114. America Barbra Tolentino, Chicago, Illinois "There is too much advertising and I want more people to think about what they are seeing. I'd like to put up posters of this in public places. I want people to look at it and go 'Wow!'"