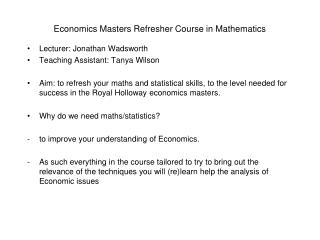 Economics Masters Refresher Course in Mathematics. Lecturer: Jonathan Wadsworth Teaching Assistant: Tanya Wilson Aim: to refresh your maths and statistical skills, to the level needed for success in the Royal Holloway economics masters. Why do we need maths/statistics? REFRESHER ON REGULATION O - . a presentation to the bank compliance association of ct september 29, 2010. arthur t.

Origami &amp; Mathematics: Fold tab A to flap B? - . by joseph m. kudrle department of mathematics/statistics

Literacy in the mathematics classroom - . aaron wilson. why focus on literacy in mathematics? activating prior knowledge

Literacy in the mathematics classroom - . aaron wilson. why focus on literacy in mathematics? activating prior knowledge

SOLO in Mathematics - . mitchell howard lincoln high school . activity : discuss for 1 min with the person next to you.