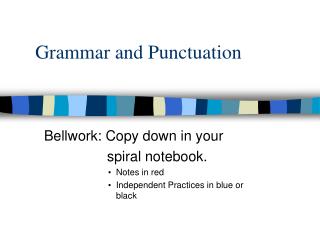 Grammar and Punctuation. Bellwork: Copy down in your spiral notebook. Notes in red Independent Practices in blue or black. Grammar: Four Types of Sentences. Declarative (statement that ends with a period) Interrogative (question that ends with a question mark)

Punctuation!! - . the function of punctuation is to make your writing clearer and easier to understand. the punctuation

PUNCTUATION, Part 1 YOUR FAVORITE GRAMMAR SUBJECT AND AS EASY AS EATING ICE CREAM - . “the used key is always

The Punctuation Detective Agency - . a timer at the top of the screen indicates that the slide may have timed elements.

Punctuation - . 12 simple rules for punctuating sentences. 12 punctuation rules. these rules do not cover every point on

TCAP Review - . 1. david was known for belching; and telling inappropriate jokes in public. a. capitalization b.