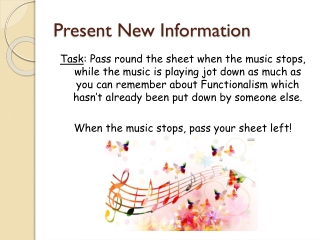 Present New Information. Task : Pass round the sheet when the music stops, while the music is playing jot down as much as you can remember about Functionalism which hasn’t already been put down by someone else. When the music stops, pass your sheet left!. Lesson Objective.