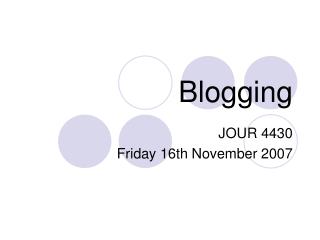 Blogging. JOUR 4430 Friday 16th November 2007. Content. What is Blogging? DailyKos the Community-Blog Blogging at War. What is Blogging?. by Sabina Ticevic. What is blogging?. A publishing system for personal websites Publish your thoughts, meanings, pictures and reflections Blogging! - . what is a blog?. a we b-log online journal / diary latest entries at the top a (usually) public place for

Blogging. - Blogging. what is a blog?. “a web-based journal in which people can publish their thoughts and opinions on

BLOGGING - . what is it?. blogs are found on the internet. the term “blog” is short for web log. a blog is a

Blogging - . clint oleson comp450 lingard. definition. a blog by definition is a website which is regularly updated and

Blogging… - . writing and growing as authors. rules for the lab. no food no drinks no “abuse” of the equipment save

BLOGGING - . a research and resource repository. what is a blog ?. a reverse-chronologically ordered sequence of entries

Blogging - . prof. deedra hickman enc 2210 technical writing. what is a blog?. “web log” which was shortened to blog

Blogging - Website money - simple methods to make cash from your own website. it's possible for you to change your

Blogging - . an introduction. (n.) short for we b log , a blog is a web page that serves as a publicly accessible

Blogging - . week 1 lecture 2. website of the week. map crunch http://www.mapcrunch.com/ allows you to click on a country