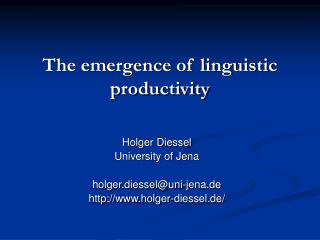 The emergence of linguistic productivity The emergence of linguistic productivity

What cross-linguistic variation tells us about information density in on-line processing - . john a. hawkins uc davis

Globalization and the BRIC ’ s Emergence – Understanding challenges and opportunities - . the brics. determinants of

Sleep and Productivity - . what does the literature say?. there are two schools of thought regarding sleep!. could do

Globalization and the BRIC ’ s Emergence – Understanding challenges and opportunities - . the brics. determinants of

The Context for the Emergence of the Profession - Important cultural influences on the emerging sport, fitness, and