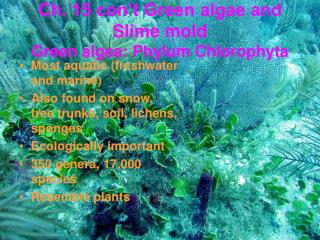 This has been discovered by comparing the RNA sequences of modern plants and green algae. - There is little evidence to

ALGAE - . hay mrs b and 7j. lets take a journey through algae. so listen up. what is algae?. algae on hand. it’s a

Algae - . by erica gonzales. what are algae?. protists that use photosynthesis classified by their pigments: purple,