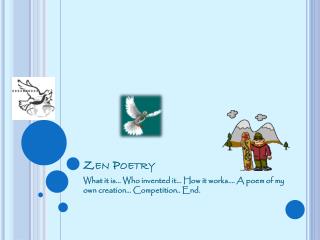 Zen Poetry. What it is… Who invented it… How it works…. A poem of my own creation… Competition.. End. . What is “ zen poetry”????. Zen Poetry is a Japanese form of poetry. Individual poems are known as “Haiku’s” 俳句 Zen - . important points to remember!. the indigenous religious tradition of japan is shinto it is based on worship of

ZEN - . zen buddhism is: “ a direct transmission outside tradition and outside scripture: no dependence on words,

Zen - . so what is it?. “zen,” is beyond definition and logic. it is at the same time a particular teaching of

Zen Calligraphy - . ‘true creativity is not the product of conscious effort but the phenomenon of life itself.’

ORM Zen - . marc esher cf.objective () 2011 http://bit.ly/cformzen. announcements. get this presentation and all code at

Zen Review - . daoist contributions to zen/chan 禪 get rid of desire by forgetting words/concepts wu-wei and

Presentation-Zen - . a book by garr reynolds this slideshow needs work to make it follow the recommendations of the

Zen Buddhism - . what is zen?. it is a form of mahayana buddhism that emphasizes wisdom attained through experience. zen

Felisa Zen - . what amount of baking soda reacted with 10ml of vinegar produces the greatest volume of carbon dioxide?.

Zen tangles - . when you create a zentangle , you create a beautiful piece of art. you also can deliberately create a

An introduction to poetry - . metaphors be with you (and similes, too). metaphor