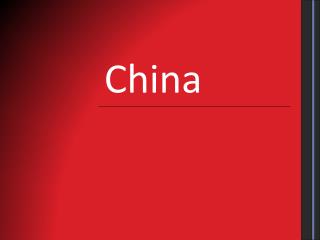 China. Why China?. China is a capitalistic communist country! Say what? It did a SINGLE TRANSITION…just economic—will it lead to political change? It always has… Authoritarian, one party state Most important economy in the world Twilight zone…parallel universe CHINA - . traditional china. son of heaven. the king served as a link between heaven and earth king consulted spirits of

CHINA - . by: chris griffith &amp; john boyko. about china. china is a tight knit society with strong values and

china - What china now look like? www.chinahourly.com will tell you the most beautiful view in

China - . people’s republic of china. general information. at one time, china was one of the leading civilizations in

China - . what images come to mind when we think about china? how do these images correspond with what we hear about

China - . geography. 1. the mountain range that separates the huang and chang river valleys is called the qinling shandi.