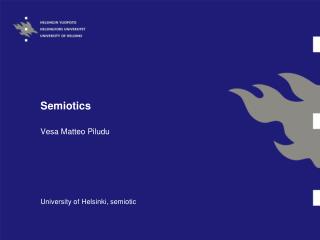 What is Semiotics? - . semiotics. the study of signification and communication how meaning is constructed and understood

Week 4: Semiotics &amp; Theatre - . today we will seek to answer the following questions: w here is meaning made on

Structuralism and semiotics - . advanced english 9. compulsory intro slide. “the test of a first-rate intelligence is

Semiotics, Post-Structuralism, &amp; Postmodernism - . a primer for the reading of white noise. at it’s core: Semiotics of Roland Barthes Chapter 26 - . making of myth: stripping the sign of its history p. 336. semiotics of roland

Semiotics is about a System of Meaning - . the word “ cat ” only makes sense in relation to other words: “ dog ”

Introduction to Semiotics - . md1h05c. general overview. what is semiotics?. semiotics (from the greek ‘ semeion ’)

SEMIOTICS - . what is semiotics?. semiotics is the study of signs. a sign is something that stands for something other